Get Your Hands on Some Mahi

Get Your Hands on Some Mahi 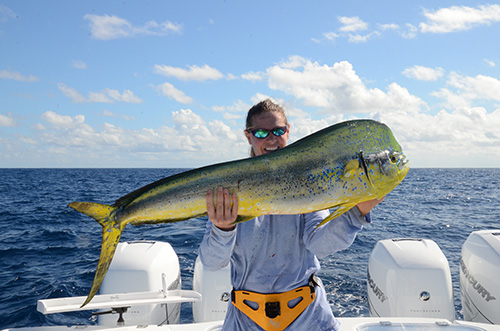 If you love saltwater fishing in Port Canaveral, our offshore Dolphinfish expeditions are for you. Mahi is one of the most sought-after migratory fish in Florida for good reason. Their fight, taste, and looks (in no particular order), make them stand out from other breeds. While they’re typically referred to as “dolphinfish,” there’s nothing “dolphin” about them. Mahi are cold-blooded fish that breathe using gills and produce eggs. They thrive in warm, tropical climates, making them a favorite among fishermen along the gulf. Mahi are known to run in schools. So, if you find one, you’ll probably find many. It’s very common for multiple catches to occur at the same time after casting lines, making it one of the most enjoyable forms of chaos among anglers.

If you haven’t tried Mahi yet, you’re missing out. It’s one is also one of the tastiest fish around. They’re delectable to eat and are a very versatile table fare. Any great restaurant will have Mahi on the menu. From Mahi tacos and ceviche to blackened, grilled, or coconut crusted, you won’t find a piece of fresh Mahi that you don’t love. If you’ve caught the filet yourself, chances are you’ll love it even more!

Mahi is a ray-finned fish and one of the most beautiful in the world. There is nothing more extraordinary than watching them light up when they are chasing your bait. It’s a rush that can’t be appreciated by anyone but an angler. The iridescent blues, greens, and yellows are what set them apart from other large breeds of fish. If you’re lucky, you may see Mahi that are more than 4 ½ feet long. Male Mahi have obtrusive, large foreheads while female Mahi has smaller, rounded heads. No matter which you catch, you can expect it to weigh between 15 to 30 pounds.

Are you hooked yet? Well, we are! So, let us share with you a little more about our premium offshore fishing charters in Port Canaveral. Since April and May, we’ve seen a surge of Mahi in the area. Due to the warm weather conditions, dolphinfish are starting to make their way closer to shore for migration. Based on patterns that we’ve seen, the spring months are the best time to catch Mahi. Fishing in this part of Florida can be amazing even through the summer. Towards the autumn months though, there tends to be a drop-off in the amount of Mahi caught. For example, we landed close to 20 fish on June 15th while out-targeting other fish. If there are weed lines and activity along the Gulf Stream, there’s always a shot at finding a school of Mahi.

On Angler’s Envy Charters, we provide nothing but the best experience when saltwater fishing in Port Canaveral. We like to troll and sight fish along with current breaks, weed lines, and floating debris near the Gulf Stream, which is typically between 28 and 32 miles off the coast. While trolling, we run a spread of 5 to 7 rods with a variety of naked ballyhoo and skirted ballyhoo rigs. We sight cast with jigs and soft plastics when a school is spotted and then it’s “game on”. During the trolling phase, we’re constantly scanning the water for signs of life. This could be birds working the area, bait getting busted, or even the commonly seen free-jumping Mahi or sailfish.